Despite Indonesia’s decision not to align with either of the two blocks, Soviet or American, internal instability forced the government to change its position. After installing a guided and managed democracy system, president Soekarno came closer to the Indonesian Communist Party (PKI). Soon after, the nation’s economy collapsed and inflation escalated uncontrollably. Political unrest and seizure of power by Suharto 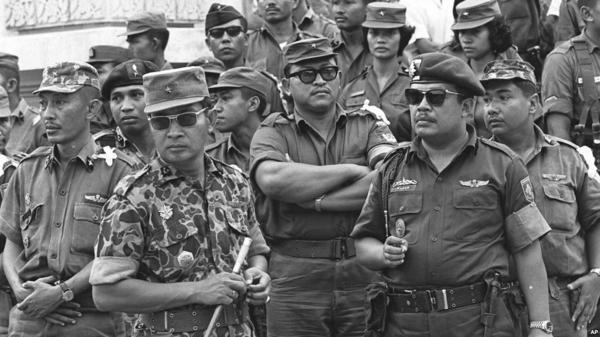 Indonesia was on the verge of a major blow up but in the night of the 30 th of September 1965, a dramatic episode changed the course of history. Near Jakarta, six top generals of the Army were kidnapped and killed by a group of Army conspirators. General Suharto, commander of the army’s strategic reserve was still relatively unknown at the time. He quickly took the lead of the army to end the insurrection. He dissolved and banned the Indonesian Communist Party, which he accused of being behind the killings, and prohibited all kinds of dissemination of communist doctrines. Five months later, he managed to obtain full power by constraining Sukarno to sign the Supersemar letter, a document in which he surrendered all executive authority to Suharto. Powerless, the former president lived under house arrest until his death in 1970. The bloody transition toward the New Order constitutes one of the darkest periods in Indonesia’s history. The political purge targeted the elimination of all alleged communist sympathizers and anyone close to them. Mass murder and imprisonment extended to ethnic and religious minorities mainly the Chinese community, intellectuals and artists. An estimated 500,000 to more than one million people were killed during the few months following the controversial coup attempt. Suharto’s government 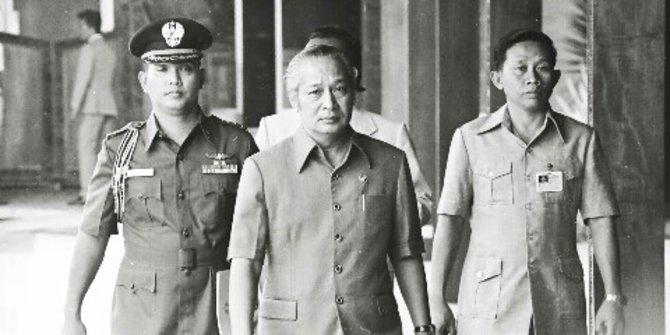 From that moment on, holding full control of governance, Suharto focused on the nation’s development. He allied with the United States and international organizations like the UN and IMF. At the same time, he broke off diplomatic relations with the soviet block and China. During his rule, the New Order, he brought stability, economic development and family planning at the cost of individual freedom and democracy. A sham election from which he inevitably came out as the winner, was held every five years. With this strategy, he ruled Indonesia for thirty-two years. Under his presidency, foreign investment started to flow and the country experienced rapid economic growth. Suharto accommodated international mining and oil companies that wanted to settle in Indonesia. Part of the income generated went to built administration, education and health infrastructures. In the mid 1980’s Indonesia yielding to pressures to liberalise the economy, privatized hundreds of state enterprises. Suharto entrusted them to relatives or near relations whom became extremely wealthy from that deal. Political unrest periodically arose in different parts of the archipelago but any opposition to the New Order was promptly suppressed. The invasion of East Timor by Indonesian forces in 1975 marked another dark page of history with massive killing of civilians followed by decades of occupation. As decades went by, collusion, corruption and capital embezzlement infiltrated every levels of the government while social disparities deepened and general discontentment increased. Suharto’s grip on power was unshaken until the Asian Financial crisis of 1997 when fueled by the rupiah’s fall and severe price hikes, student demonstrations intensified and riots broke out in several cities especially in the capital. The Indonesian masses supported by many leading figures called on Suharto to step down. He finally announced his resignation in May 1998, leaving the presidency to his vice-president and protégé B.J. Habibie. The fall of the dictator was followed by the reformasi era with long awaited measures to restore democratic values.
See as well
Indonesia’s Buddhist and Hindu heritage
Dutch colonial era
Guided democracy
Reformasi and Democracy
NOS CIRCUITS
Lie a ce conseil de voyage
Parfum the Mongolie
14 jours - 2,350$
Parfum the Mongolie
14 jours - 2,350$